Cologne, 1 April 2016, Caroline Noeding, Miss Germany 2013, has successfully prevailed over the Miss Germany Corporation (MGC) in the Oldenburg Regional Court (Az. 17 O 1118/05). The Miss-Wahl Organizer from Oldenburg was sentenced by the lawsuit of Miss Germany in the first instance to provide information about receipts by presenting the business account statements.

The background to the dispute is a review of all settlements and payments after the cooperation between 2013-2014, which Miss Germany 2013 announced without notice. On behalf of Caroline Noeding, the law firm Rehkatsch Rechtsanwälte requested information to disclose the business account. This account was set up as a trust account for Miss Germany. Strangely enough, the management (Ralf and Horst Klemmer) vehemently refused to do so. Caroline Noeding then successfully filed an action for information at the Oldenburg Regional Court. The court ruled that:

“The defendant is condemned to provide information by submitting complete copies of all account statements with the number xxxxxxx at Landessparkasse Oldenburg for the period from 5 March 2013 to 30 December 2014.

Despite the clear verdict, Miss Germany Corporation continues to refuse to provide proper information and presents only blackened bank statements. As a result, enforcement proceedings against the company were initiated.

Caroline Noeding: “I was surprised by the self typed calculations. There may be something wrong here. As I have heard from other Misses, their remuneration was much higher. In addition, I do not know in part what the Klemmers have really negotiated and taken. All very unclear and nebulous to me.”

Specialist lawyer for media law Patrick Rehkatsch:”Due to the salami tactics of Miss Germany Corporation, we assume that it has something to hide. In addition, it is not yet clear how much income has actually been generated by all kinds of advertising and sponsorship contracts. Our client may still be entitled to compensation.” 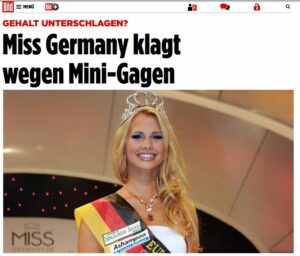