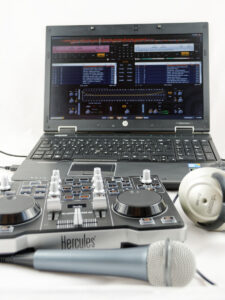 The German Federal Constitutional Court is dealing with a case of music sampling in Germany of well known musicians and has to decide whether unsolicited sampling is permitted (Az: 1 BvR 1585/13). The decision is expected this year and will probably have a major impact on the music market.

The famous german band “Kraftwerk” had sued the producer Moses Pelham civilly and twice won at the Federal Supreme Court (Az: I ZR 112/06 and I ZR 182/11). The producer had sampled sequences from songs by Kraftwerk without consent and used them for his own songs. The producer Moses Pelham was sentenced to default the production and distribution as well as to return the affected CDs and pay compensation. That‘s why the producer is now defending himself and the affected singer of the song, Sabrina Setlur, and eight other musicians who joined, with a constitutional complaint at the Federal Constitutional Court. It’s about the song “Nur mir” by Sabrina Setlur from 1997. It consists of a loop (continuous rhythm figure) from the song “Metall auf Metall” by Kraftwerk from 1977. The affected sequence is only 2 seconds long.

This procedure is called sampling. It’s a quite common technique in music productions. A usually very short part is taken from an existing song and incorporated into a new one. Usually the removed part is edited and customized to the new song. It is controversial under German law whether and when exactly this method is allowed.

COPYRIGHT VS. FREEDOM OF THE ARTS

The musicians from Kraftwerk have the opinion, that the disputed track constitutes an infringement of their patent rights in accordance with § 85 paragraph 1 sentence 1 German Copyright Act. The Federal Supreme Court agreed with that opinion. Even the use of very small sequences constitute an infringement of the intellectual property right and therefore requires approval. An exception exists only in accordance with § 24 paragraph 1 German Copyright Act ( “Free Use”) when the relevant part of the track can not be replayed in the same way. But the lower courts decided, that this is not the case with this song.

However, the German Government has a different opinion on music sampling in Germany. A representative of the Federal Ministry of Justice stated in proceedings at the Federal Constitutional Court, that shortest sequences are not covered by the German Copyright Act. Also the complainants think their actions are legal due to the artistic freedom in Article 5 paragraph 3 sentence 1 of the German Constitutional Law. The necessarily consent for the use of very short sequences itself already infringes the artistic freedom. Anyhow the sampling was such a small encroachment without economic disadvantages, that the intellectual property right has to recede behind the artistic freedom. The derogation provided for in § 24 paragraph 1 German Copyright Act does not do justice to the artistic freedom, as it’s not specific enough and the music creators would be insecure about whether their actions are allowed. Overall, the creative would be very restricted in their work, as they could no longer deal with recordings from the past. The demand to produce the part in question itself, does not make sense, as they just want to refer to the original song.

By now the Federal Constitutional Court did not sort the legal situation regarding music sampling in Germany. The expected ruling this year some time in 2016 is likely to have a major impact on future music productions. Furthermore, depending on the outcome of the trial, other sampled artists could sue other composers. Due to the uncertainty of the legal situation and the widespread use of sampling in music today, especially in hip-hop, a clearance by the German Federal Constitutional Court is good to hear.

If you have questions or need assistance in a dispute with regard to copyright or intellectual property right violations, please contact us by phone at 0221-4201074, email under info@rehkatsch.de or make an appointment with our office.